And if students later transfer to NC State, the credits may be used toward a military science minor.

Wake Tech students can compete for 2 or 3-year Army ROTC scholarships to complete their degree at NC State and commission as Army officers. NC State Army ROTC cadets can pursue a commission into the U.S Army, U.S. Army Reserve, or the North Carolina Army National Guard, and if they choose to join a commissioning program, they are considered for programs with stipends and scholarships.

“Annually, we award over half a million dollars in scholarships and financial assistance to recognize the potential of these future officers and financially support their academic and ROTC pursuits.” said Lt. Col. Will Cunningham, NC State’s Army ROTC Professor of Military Science. “Wake Tech Army ROTC Cadets are exceptional members of our team and we look forward to continuing this great partnership.” 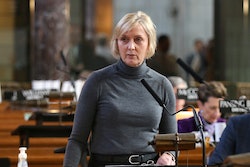