A Navy veteran – he was an aviation electronics technician – Missouri has been at A&M-Central Texas since June 2022. In the past, he has served as an admissions officer; a student orientation coordinator; and director of student veterans at the University of South Alabama.

Missouri’s parents grew up in the Jim Crow era in the Deep South, yet neither had surrendered their self-worth, dignity, or commitment to their communities. Instead, they taught him what a life of service meant, he said.

“Part of my father’s job was to go door to door to collect payment for residential electricity,” Missouri said. “From time to time, he would find someone who was about to be disconnected for lack of payment, and when he could, he would go into his own pocket to help them.”

Missouri holds a bachelor's degree in political science and government from the University of South Alabama.

Being able to work with servicemen and women pursuing education is one of the foundations of his life, he said.

“And all the help I had as a former sailor returning to get my degree was both an inspiration and a safety net that I could rely on,” Missouri said. “I want to show them that pursuing their degree has purpose and that we are all here to support them, and inspire them, and see them through to the finish line.” 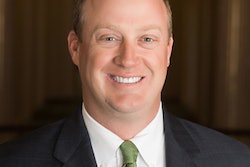